The Cycle of Abuse

Lenore E. Walker interviewed 1,500 women who had been subject to domestic violence and found that there was a similar pattern of abuse, called the “cycle of abuse”.[1] Initially, Walker proposed that the cycle of abuse described the controlling patriarchal behavior of men who felt entitled to abuse their wives to maintain control over them. Her terms “the battering cycle” and “battered woman syndrome” has since been largely eclipsed by “cycle of abuse” and “battered person syndrome“, respectively, for many reasons: to maintain objectivity; because the cycle of abuse doesn’t always lead to physical abuse; because symptoms of the syndrome have been observed in men and women, and are not confined to marriage and dating. Similarly, Dutton (1994) writes, “The prevalence of violence in homosexual relationships, which also appear to go through abuse cycles is hard to explain in terms of men dominating women.”[2] 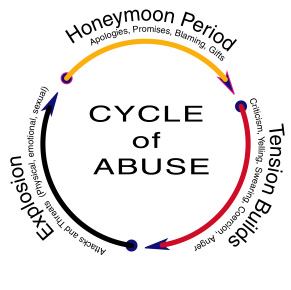 BORROWED FROM WIKIPEDIA as an example. GET YOUR OWN TEXT

The cycle of abuse concept is widely used in domestic violence programs, particularly in the United States. Critics have argued the theory is flawed as it does not apply as universally as Walker suggested, does not accurately or completely describe all abusive relationships, and may emphasize ideological presumptions rather than empirical data.[3]

The cycle usually goes in the following order, and will repeat until the conflict is stopped, usually by the survivor entirely abandoning the relationship or some form of intervention. The cycle can occur hundreds of times in an abusive relationship, the total cycle taking anywhere from a few hours, to a year or more to complete. However, the length of the cycle usually diminishes over time so that the “reconciliation” and “calm” stages may disappear, violence becomes more intense and the cycles become more frequent.

Stress builds from the pressures of daily life, like conflict over children, marital issues, misunderstandings, or other family conflicts. It also builds as the result of illness, legal or financial problems, unemployment, or catastrophic events, like floods, rape or war.[5] During this period, the abuser feels ignored, threatened, annoyed or wronged. The feeling lasts on average several minutes to hours, it may last as much as several months.[6]

To prevent violence, the victim may try to reduce the tension by becoming compliant and nurturing. Or, to get the abuse over with, prepare for the violence or lessen the degree of injury, the victim may provoke the batterer. “However, at no time is the batterer justified in engaging in violent or abusive behavior,” said Scott Allen Johnson, author of Physical Abusers and Sexual Offenders.[6]

Characterized by outbursts of violent, abusive incidents which may be preceded by verbal abuse[5] and include psychological abuse.[6] During this stage the abuser attempts to dominate their partner (victim) with the use of domestic violence.

In intimate partner violence, children are negatively affected by having witnessed the violence and the partner’s relationship degrades as well. The release of energy reduces the tension, and the abuser may feel or express that the victim “had it coming” to them.[5]

The perpetrator may begin to feel remorse, guilty feelings, or fear that their partner will leave or call the police. The victim feels pain, fear, humiliation, disrespect, confusion, and may mistakenly feel responsible.[5]

Characterized by affection, apology, or, alternatively, ignoring the incident, this phase marks an apparent end of violence, with assurances that it will never happen again, or that the abuser will do their best to change. During this stage the abuser may feel or claim to feel overwhelming remorse and sadness. Some abusers walk away from the situation with little comment, but most will eventually shower the survivor with love and affection. The abuser may use self-harm or threats of suicide to gain sympathy and/or prevent the survivor from leaving the relationship. Abusers are frequently so convincing, and survivors so eager for the relationship to improve, that survivors (who are often worn down and confused by longstanding abuse) stay in the relationship.[7][8]

During this phase (which is often considered an element of the honeymoon/reconciliation phase), the relationship is relatively calm and peaceable. During this period the abuser may agree to engage in counseling, ask for forgiveness, and create a normal atmosphere. In intimate partner relationships, the perpetrator may buy presents or the couple may engage in passionate sex.[5] Over time, the batterer’s apologies and requests for forgiveness become less sincere and are generally stated to prevent separation or intervention.[6] However, interpersonal difficulties will inevitably arise, leading again to the tension building phase.[5] The effect of the continual cycle may include loss of love, contempt, distress, and/or physical disability. Intimate partners may separate, divorce or, at the extreme, someone may be killed.[5]

Ways to get help.